Ed Warner's Cage is a band from France, they've been around for a bit now and have been playing an intense brand of screamo. Here's an interview I did with them recently. 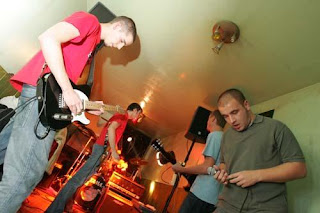 MANUEL: Hello, could you please introduce yourself, your band name, band members and what type of music you play?

ED WARNER'S CAGE: Ok, I'm Jerome, ED WARNER's singer and guitarist. The band's name is taken from...
Captain Tsubasa, the famous Japanese manga. There are four members now, we just have changed the line-up, the second guitarist has left, due to professional priorities. So I took the guitar, keeping the voice, Guillaume at the bass sings too. And there's also Charly, the second guitar and Thomas at drum. We are usually described as a screamo band, that's what we used to be in the beginning, but I think that we have more indie influence now, keeping our metal infulences too! We like bands such as CLAIR DE LUNE, but we also like GOJIRA, an incredible french metal band. So, I think that we have succeeded in digesting all of these influences to create our own sound. I don't really know how to describe the music of the band, a kind of screamo/indie/rock stuff, with a touch of metal.

MANUEL: Who are some of the bands that have inspired you to make music aside from Clair De Lune and Gojira, how much of those bands do you think floods into your sound?

ED WARNER'S CAGE: Of course we have been inspired by screamo bands like ENVY, FUNERAL DINER, also by French bands like AMANDA WOODWARD and more hardcore things like THE DILLINGER ESCAPE PLAN. But each member of the band listen to very different things, from PORTISHEAD to DIMMU BORGIR to Resume. So I think that we unconsciously integrate elements of metal and screamo, but also of pop music, rock or mathrock stuff. It's always difficult to be inspired without copying, especially when you listen to many things, but that's we try to do. We want to posses our own musical identity.

MANUEL: What are some of the more interesting and exciting bands that you guys have played with? Any dream tours that you have gone through and what are you plans for touring Europe?

ED WARNER'S CAGE: The most incredible show we've made is certainly the show with THE DILLINGER ESCAPE PLAN, in Reims (North of France). Playing with a band like that is an incredible opportunity for a band like us and that was just great! We also have played with THE ROBOCOP KRAUS, YAGE and IMPURE WILHELMINA. But the best memory we have is the tour we've made in Holland, Switzerland and Belgium with our friends of LOST SPHERE PROJECT. It's always great to play with people you appreciate, and touring with them is an unforgettable experience. We are planning a new tour, maybe during the next summer, but it's a very difficult thing to organize, especially when all the members work. We'll just take back shows again in December. Due to the line-up changing, we have been a long time without playing live, but we're back and we really want to play a lot to show our new songs. 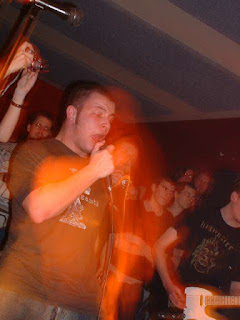 MANUEL: What do you like about the music scene in your area and what don't you like about it? Any up and coming bands that you feel are worth noting?

ED WARNER'S CAGE: Well, we live in a little town, so we know personally many bands of the area. There's an important metal scene, with really good bands, really talented. But there's also an emerging scene, some electro/pop stuff, which began to have a lot of success. To my mind, these bands do the right thing at the right time, that's why it works. They just play an actual music. Metal bands have difficulties to export their music cause it's for metal fans first. But today, there's an other phenomenon, wich appeared a few years ago, due to the internet explosion and the massive culture access. Today, anyone can do his band, they say "we want to do like this band!" or "hey, why not me?" - you know? Today, we live in a world where anyone can be famous. So, there are more and more bands, with good and bad ones, all mixed up. I think it's not a good thing, especially for the local scene, cause good bands have more difficulties to be picked out.

MANUEL: Yeah the internet has really opened a lot of doors for many and that is a blessing and a curse. More than not the more interesting and good bands don't get the recognition they deserve. How long did it take to record Iera Anagrafh (free downloads)? Any good stories that come out of that recording? Also is there a concept that surrounds it?

ED WARNER'S CAGE: We've taken our time to record IERA ANAGRAFH. I think it takes a few months, from the first snare to the last scream^^ We really wanted to do something special, something really diligent. We worked a lot, especially on guitars and voice melodies. Sometimes, we worked so much that our voices seemed to die! But I think that the result is good enough. We are very proud of this record, it's a 100% auto-prod record, made by Charly, our guitarist. There's no real concept on it, just the wish to create our own sound, our own approach.

Unfortunately, we had not many returns on the album, I don't know why. We sent it to many places but without results. I have to say that it's a little discouraging, especially when we looked at the work we've done. But that's the cruel world of the music system. So thanks for being interested by us, really. 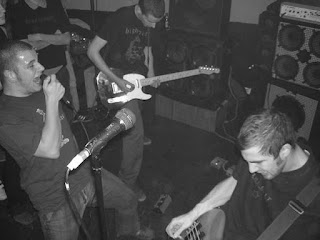 MANUEL: Haha, no thank you for letting me interview you. Any final words?

ED WARNER'S CAGE: Well thank you, keep on the good work on your blog, and maybe we'll see you on tour one day. For all ED WARNER's news, go on our myspace, www.myspace.com/edwarnerscage
We are composing new songs, so there will be new sounds soon. See you.

Posted by Manuel Mayhem at 7:50 AM