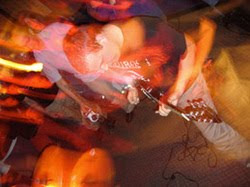 Will Killingsworth is a prolific musician who has shared his talents in Orchid, Bucket Full of Teeth, Ampere, Failures, and Vaccine. The following is the result of an interview with Will Killingsworth that I did in April of 2008 for a now out-of-print zine. Enjoy.


"I've been using the same guitar for about the past ten years now, which is a GIbson SG from the 90's that someone before me modified with a new pickguard which enables it to hold regular P-90 pick ups. I've just realized recently how important the P-90s are to the sound I've been getting for years, and that their clarity has allowed me to get away with some of the more dissonant/weird chords I use sometimes and have it not sound like mud. So, getting the guitar with them in it was really a happy accident I feel. That guitar was used for every track on Orchid, Bucket Full of Teeth, and Failures records. For Ampere I usually use the SG on one track and then a Gibson S1 from the 70s on another track, it has a thinner, cleaner sound, that really lets the notes shine through, but on it's own can be a little weak sounding.

For amps, I've gone through several changes, so I guess I'll go through them in stages....


I started off in Orchid playing only out of a Marshall Valvestate, I think the model number was VS100 or something, it was when they were first introduced in the late 90s I think. After a while for live use I was playing out of the Valvestate with our drummer's Mesa Mark IV head as a fullstack with the Mesa coming out of the bottom, and the Valvestate from the top. I never really bonded with the Mesa very much, it was kind of muddy and not really to my liking, but it did make the guitar louder, which was our main concern at the time.

For recording in Orchid, the first recording with Steve Austin was done completely using the Valvestate and no pedals. Then when we recorded three songs at God City I only recorded one guitar track, also with the Valvestate. When we went back to record Chaos is Me, and then again the 10", the Jeromes Dream split , and Red Scare split, I did an initial track with the Valvestate and then did overdubs with a JCM900 and a Boss Metal Zone pedal set with the distortion very low used as an overdrive. In the present day I can't believe I actually used a Metal Zone, because they're so noisy, and thin sounding to my ears, but somehow it worked. When i recorded our final LP I used a similar set-up, but I believe all the guitar tracks were done with a JCM800 and a Metal Zone pedal.

In Bucket Full of Teeth for the three 7"s I think I used the same JCM800, which belonged to Brad from Wolves who played bass in B.F.O.T. and again coupled with the Metal Zone. Although somewhere I transitioned to using a Korg Tone Works pedal board for the distortion and that is what was used on the LP, and live, possibly on the third 7" as well. Live I ran the JCM800 with a 100 watt Fender Bassman that I used to own. On the LP I think the original live tracks were just straight into a JCM800, maybe with an overdrive of some sort. The overdubs were the Tone Works pedal, one track through the JCM800 and another track through a Traynor YBA-1.

With Ampere I have gone through many different phases of set-ups for live and recording. Live has always featured the JCM800 that I eventually bought with some other amp, chronologically I think it has gone from being a Traynor YBA-1 (great amp, but not loud enough for my tastes), a Sound City 120 (Plenty loud, but terrible sounding amp), an Ampeg V4B (loud and nice sounding, albeit a bit dark), a Marshall JMP (great sounding, but I get scared of taking it on tour because it's beautiful), a Dr. Z SRZ-65 (Pretty good sounding, but not really to my taste), and now I'm trying to figure it out between another JCM800 and an old Laney Pro Tube Lead 100. A ridiculous list I know. Amps used on recording have varied almost as much, although the last few things we've done (Daitro split, Oath split, Funeral Diner split, Ringers split, and a couple of comp songs) I've played out of the JCM800 and JMP at the same time which works nicely. I also use my 18 watt Dr. Z Carmen Ghia a lot, which has a nice amount of attack and midrange. I think the Sinaloa split has my V4B and the Ghia played simultaneous, with most of the mix being the Ghia. I am really interested in very percussive and bright guitar sounds where you can hear the attack every time the guitar is strummed, and ultimately I don't use very much distortion at all. The way I see it, what I'm playing is often already so dissonant and noisy, that making it more distorted and noisier just results in making it sound unintelligible.

In Ampere I've sometimes used light overdrive pedals, and have realized that I'm more after a clean boost pedal, or again something that can bring out the sparkle or treble of the guitar tone. Lately I've been using an M.I. Audio Boost n' Buff pedal, just as a buffer (pedal turned off, but still having a high input impedance), which works to draw more of the treble and percussive sound of the guitar out of it. The Z Vex Super Duper 2-in-1 is a similar sort of pedal that I also like and have used.

Speaking of which on the upcoming Failures LP, there are two guitar tracks, one of which is the Z Vex Super Duper 2-in-1 into the Dr. Z Carmen Ghia, and the other is a JCM800 set extremely clean with no pedals in front of it. Live I've switched to using the M.I. Audio pedal with the same amps I use for Ampere, and for leads I've been boosting them with a Keeley modded Boss Blues Driver.

Anyways, I think that about covers it.....! Apologies if this is way too much info, or seems self-indulgent. I'm just trying to answer your question as best I can, and I spend too much time thinking about all of this stuff, as you can probably tell...."

Posted by picklehammer at 11:45 PM