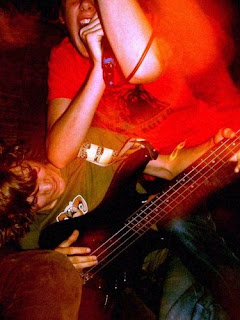 Yossarian Is Drowning was a small, now-dead screamo band from Britain. You can tell they are from Britain with their vocals, which I like, because most bands I have heard from Britain don't always necessarily have that British accent with their music. They have a few E.P's, a split with We Are Corpses, and a fairly enjoyable self titled under their belt. For the most part they focus on having a melodic and structured sound, but that doesn't mean they don't know how to make their music sound good while playing chaoticly. Yossarian Is Drowning was a good band.

Here is a link to their myspace so you can check out some of their tunes: http://www.myspace.com/yossarianisdrowning
Here are two of their releases that I could find:
s/t: http://www.mediafire.com/?wikgwnnti1t
split w/ We Are Corpses: http://www.mediafire.com/?yzzzonmmmyz
P.S.: At the end of the s/t, there is a nice little surprise. I'm not sure if the band put that on there themselves, or if who ever uploaded the album added it themselves. Either way, it's cool.

Posted by willsoutherland at 3:37 PM